May 2014. Races of large training sailboats STI (Sail Training International) were one of the highlights in the history of RUNNING ON WAVES. Thousands of visitors climbed on board at each port of the regatta, media, television, press conferences, honorable visitors and, of course, the race itself. Dozens of large training sailboats and yachts on emerald dark blue waves of the Black Sea in unison and sailing hectic activity seeking to win!- Incredibly spectacular event. According to the rules of the race RUNNING ON WAVES could not participate in the races, because she's not a training ship. But she was assigned to a honorable mission to be the judges' ship. That means she had to be the last one that leaves the start line, to record the crossing of the starting line and come to the finish first, to record crossings of the finish line by other sailboats. There were judges from STI, media and passengers aboard.

There was some sort of the intrigue on RUNNING ON WAVES, since her captain, Yuri Kushchenko, also a former captain of “Tovarish”, was raising all the sails and was in rush to catch up with the regatta immediately after the passage of the starting line by participants. It was a success! Only the intervention of international judges on board forced the captain to slow down twenty degrees roll and go quieter.

However, the captain bragged with a fuel economy at the end of the regatta. He managed to sail under the sails only almost all the time. The biggest intrigue of the race became “Akela”. The sailboat, that doesn’t go faster than 9-10 knots, passed both stages faster, than large Tall Ships, which easily develop up to 18 knots. It seems right to say, that one who make fewer mistakes wins a sailing race.

There are two official first places, Akela in class BC and frigate “Nadezhda” in Class A. 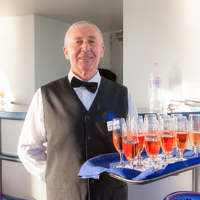 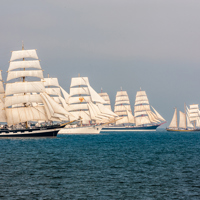 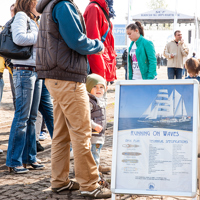 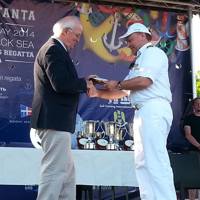 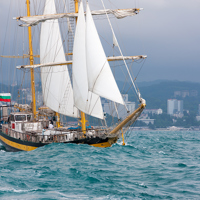