Wherever you wish to sail

Stupendous sunsets of Santorini. Mykonos with its vibrant nightlife. Lavish green of Northern Sporades. Corinth Canal, a manmade miracle. Peloponnesus, where ages of History are immersed into a marvelous dream.

Two seas, the Aegean and the Ionian, copiously gifted with dozens of islands, many of them not even accessible either by plane or by a larger cruise ship, and each one unlike its neighbour. Whether you have it in mind to disappear to a secret abode away from civilization, or feel like partying all night long in a posh resort, or find yourself in the mood to touch ancient marble with your fingers, all these adorable worlds are just hours sailing from each other, an enchanting kaleidoscope of colours, flavours and sounds on your marine chart. And that is Greece. And that is you luxury sailing charter in Greece.

Now what of wonders that one finds ashore in countries like Italy, Malta, Cyprus, Turkey, Albania, Croatia, Montenegro, France, Spain, Portugal, Lebanon, Israel, Egypt… ? Well, they are all within easy reach by RUNNING ON WAVES.

Explore below to see some of our most popular charters. Remember: this information is a suggestion of places to go, but we are happy to customize a trip for you.

In Greece you will never be bored with temples because they radiate mysterious energy of the past. See one of the Sacred triangle of Ancient temples, visit the place where wise Nestor lived, fill up with inner power and clear your mind. Strong mind cultivates a strong body. You will have a chance to see the place the Olympics were born.

At our sailboat RUNNING ON WAVES you can not only enjoy unforgettable views of Greek islands but also dip into a crazy spirit of Bodrum, a Turkish resort that never sleeps.

Book South-Aegian charter and grant yourself with a marvelous celebration!

Only luxury sailboats as RUNNING ON WAVES can show the true beauty of the most famous Mykonos, which becomes a center of vivid nightlife in summer time and famous the gorgeous beaches, and of Santorini island were the most beautiful movies of Greece were made. RUNNING ON WAVES perfectly suits the luxury atmosphere.

Our sailboat rental will also get you to Paros filled with quiet villages, narrow streets and monasteries and to Ios island, boasting nearly 75 kilometers of spectacular white sand beaches.

Astypalaia is most commonly visited during the summer months as Greek nationals and tourists escape the mainland heat for the sea breezes and wilderness.

Patmos is famous for its majestic nature and the atmosphere of Christianity. St. John the Evangelist wrote the “Apocalypse” here.

Rent a sailboat to visit Kos, the birthplace of Hippocrates «the father of medicine»!

From the Blue caves of the tiny Paxos to “south gates of Albania” – ancient city of Saranda..

..And Venecian streets of Corfu, famous sky blue Antipaxos beaches, medieval spirit of Lefkas, Itaka romance and reserves of Zakynthos on the way.

And, of course, the charter includes the largest Ionian island – Kefalonia, where you can make a pilgrimage tour, stop by a local winery and see an underground lake Melissani, famous for its destructed cave roof.

All this is available for you with the charter on board of RUNNING ON WAVES!

Our charter sailboat will bring you to the place, settled by Greeks at an early date, possibly as early as 1200 BC.

Corfu island used to belong to Italians. The town of Kerkira is an evidence of such influence - Venetian labyrinth of streets, garlands of laundry ropes high above the head and coffee aroma streaming from every open door.

Lefkada island got its name due to white upright rocks, which stand along most of the island’s western coast.

Rent our sailboat to see the islands’ beauty!

The 5th century was the time of ultimate bloom of Athens, one of the most ancient cities in the world. In Aegina island you will see the wander around Paleachora and other archeological sites. Epidaurus was a small ancient city, which was known as a Christian healing center till the mid 5th century.

Lying under the shadow of Mount Etna quiet and cosy Catania, one of the most beautiful Sicilian towns – Syracuse, a significant historical center of the island – Taormina, the Southest from

Hurry to book the charter and enjoy an incredible beauty of Siclily!

During our charter trip you will visit Civitavecchia and Anzio, ancient Italian ports, see Naple4s, a jewel in a crown of a Southern Italy and one of the most beautiful and vibrant corners of the country – Positano.

Having passed a small fishing centre Mazara del Vallo and one of the most spectacular Sicilaian towns – Syracuse, our sailboat RUNNING ON WAVES will take you to Valetta, which is not only full of architectural monuments but is a monument itself! Almost every building in the town is a landmark, described in every tourist guide.

You can see all of this if you book the charter on our XXI century sailboat now!

Rent a sailboat to see Cyprus, the meeting point of Europe, Asia and Africa.

Cyprus is endowed with golden beaches, virgin green forests and other natural wonders. The environment is one of the healthiest in the world, free from pollution and the other ill-effects of industrialized countries.

RUNNING ON WAVES, one of the best luxury sailboats offers Greek island charters as well.

Our sailboat RUNNING ON WAVES offers you mysterious Beirut!

From lively Limassol this charter will take you in an old Tyrian city, Beirut, currently a modern capital of Lebanon. Since ancient times different civilizations and peoples have been interacting here.

Now it is not only a cultural and historical center but also a modern and dynamic city.

Book a charter and drawn in an enigma of the East! 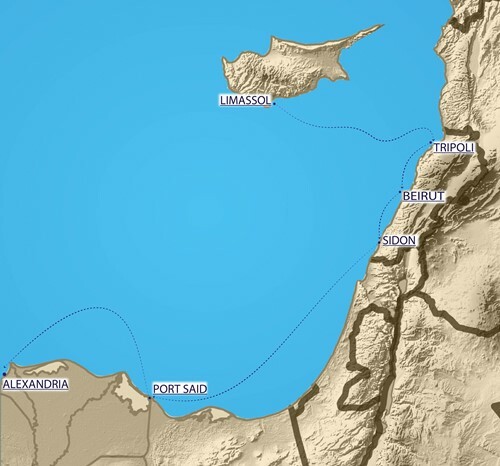 This charter sets off in Limassol – the second important city of Cyprus. It is the largest commercial, financial, tourist and cultural center of the island. The city is located largely at the same distance from all main Cypriot landmarks.

Through former small settlement and a nowadays picturesque town Paralimni you get into a first Jewish city in a modern history – Tel Aviv.

On board of our XXI century sailboat you will easily wind up in this business and cultural capital of Israel!

They say Dionysus and Ariadne produced wine famous across the whole Ancient Greece here. Moreover, these islands are perfect for secluded leisure. They are famous for its divine untouched nature and secret places. Furthermore, they have significant input in history - sure, from here the Greek alphabet comes from. 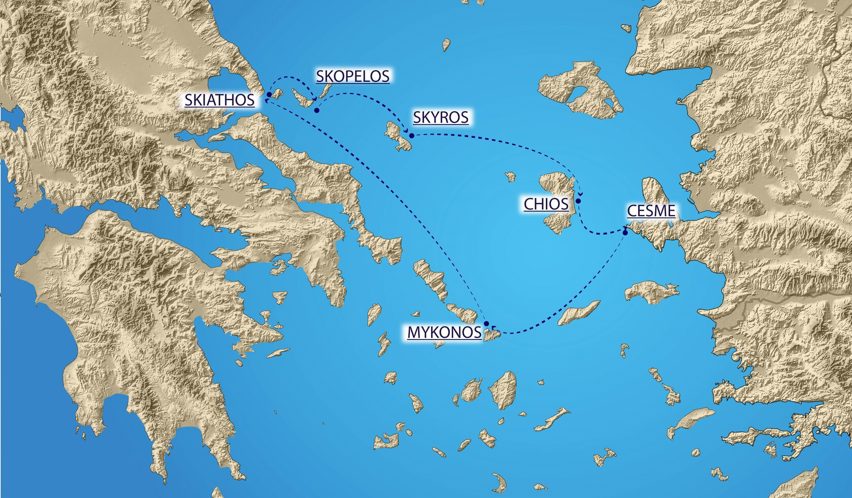 Winter is mild in the region of the Red Sea.
You will not suffer from heat, and yet it is a vacation time in earnest – with bathing, water toys and diving, while going inland to visit those awesome historical sites is rather relaxing.

Get a glimpse of this enchanting ancient scene - the Red Sea and the lands around it, and of miracles you will see there. 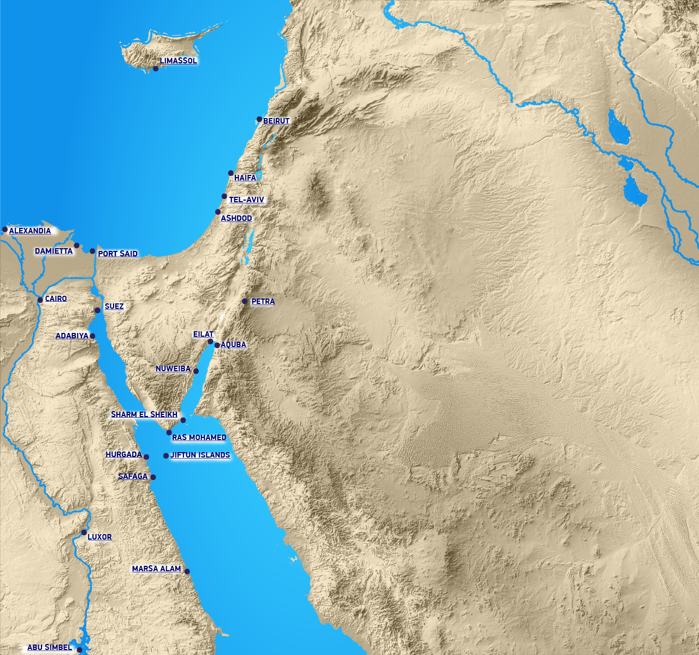